Caroline Sunshine (born September 5, 1995) is an American actress, dancer and singer. She is best known for her role as Barbara Winslow in the family film, Marmaduke, and for her co-starring role as flashy, rude European exchange student Tinka Hessenheffer on the Disney Channel comedy series Shake It Up. 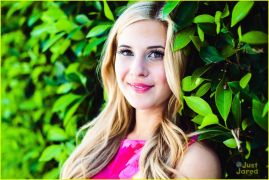