Mary Carlisle (born February 3, 1914) is a retired American actress, singer and dancer. Born in Los Angeles, California, she starred in several B movie-grade Hollywood films in the 1930s, having been one of fifteen girls selected as "WAMPAS Baby Stars" in 1932. She became a centenarian in 2014. 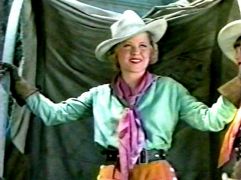