René Murat Auberjonois (/rəˈneɪ oʊˈbɛərʒənwɑː/; born June 1, 1940) is an American actor. He is known for portraying Father Mulcahy in the film version of M*A*S*H, Chef Louis in The Little Mermaid (and singing "Les Poissons"), and for originating a number of characters in long-running television series, including Clayton Endicott III on Benson (for which he was nominated for an Emmy Award), Odo on Star Trek: Deep Space Nine, and Paul Lewiston on Boston Legal. 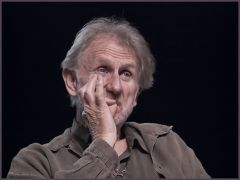